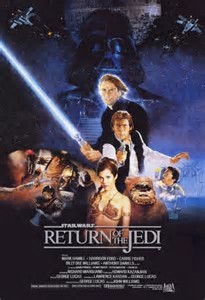 Return of the Jedi was meant to be the end of an era. For the most stubborn of the Star Wars fans, it is the end, as some want to pretend the prequels never happened. It is the conclusion to Luke’s journey and the closing of an epic tale.

This is my favorite movie in the entire saga, yes, including the prequels. While I admire the risk taken by revealing that Darth Vader is in fact Anakin Skywaler, to me Jedi is better because it is the next step. Having a big reveal is one thing. What is an even bigger risk is going forward with that reveal and letting it alter the course of the story.

There are drastic changes as a result of the story. Lando Carlrissian, a former friend of Han Solo, has now joined the Rebellion. Apparently in the time between Jedi and Empire, Lando wanted to make amends for sacrificing Solo for the sake of allowing Cloud City to remain neutral. Seeing his friend encased in carbonite causes him to realize he cannot sit idly by and hope that someday the Empire will be overthrown.  He spent the last half of the movie helping Leia to escape Cloud City. He takes the next step in his atonement and joins the rebellion.

Han Solo is no longer neutral either. There were hints early on that Solo wanted to join the rebellion like the rest of the heroes. However, he couldn’t as long as Jabba the Hutt was alive and threatening his life. He’d be endangering his friends because every bounty hunter would be gunning for him. But when Leia murders Jabba, that threat is lifted and now Solo can be the hero he was meant to be.

Yoda is now close to death when Luke meets him once more. The once courageous and eccentric mentor is now no longer needed and he faces death with dignity, as Obi-Wan Kenobi did before him. But before he passes away, he tells Luke the truth. Obi-Wan explains that they did not keep the truth from Luke because they felt he could not handle it, but because they didn’t want him to make the same mistake Anakin did. Even if he is doing a good thing by confronting Vader, if he lets his emotions cloud his judgement, it will be all the more easier for the Emperor to manipulate him. And he almost succeeds.

Ian McDiarmid is the true star of the show. His rasping voice and diabolical persona drives the story to its conclusion. We had heard hints of the scope of his villainy in the other movies, but now it is on full display.

To some, the Ewoks are the movie’s weakness. The idea that they so easily defeat the Stormtroopers with such primitive weaponry doesn’t seem to make sense. But I like the Ewoks. They are amusing creatures and I don’t think they get in the way of the story. I even enjoyed the cartoon series that was set before the trilogy and showed what their life was like before the Empire set up camp.

Jedi is a fitting end to a fantastic saga. Even if we never had the prequels, I am certain it would still have been enough.

Next, I will look at the saga’s impact on merchandising in cinema.