Last year, I celebrated the 40th anniversary of the first Star Wars movie by reviewing all the movies that had been released up to that point, stopping at The Force Awakens. For those who were wondering why I didn’t review The Last Jedi, it was because I didn’t think I’d see it in time to include it in my recap. I have no theater nearby, and they cost a LOT these days anyway.

So, was it worth waiting longer than most people to see what happens after that great cliffhanger of Rey finding Luke and giving him his light saber? Yes! In fact, I’ll say this right now: The Last Jedi is the best Disney Star Wars movie so far. It’s the best movie since the prequels. Ignore every hater.

END_OF_DOCUMENT_TOKEN_TO_BE_REPLACED

When Disney acquired Star Wars from George Lucas, they decided to release one movie each year at Christmas. This started with Episode 7, The Force Awakens. In addition to the main movies (the “episodes”), we would also get movies that touch up more on the mythos of the franchise. Rogue One was just the first of these. Because it is the most recent Star Wars movie released, I have chosen it to end my retrospective. I don’t think I’ll be able to see The Last Jedi before the end of the year, so I will wait for the DVD.

Rogue One takes place before the very first Star Wars movie and follows a team of rebels attempting to retrieve the plans for the first Death Star (because Return of the Jedi has a Death Star too).

END_OF_DOCUMENT_TOKEN_TO_BE_REPLACED

When I heard that a new company had taken over Star Wars from George Lucas, I had mixed feelings. He was 100% involved with the prequels, and while I liked them, I still came to the same conclusion that most people did: less is more. When he did the originals, he had other people telling him what they thought worked, which was part of the reason he wanted 100% involvement in the prequels. He felt we weren’t getting his full vision. But now, Disney would have very little of Lucas, even less than the originals did.

Then I found out JJ Abrahms was directing. I was still wary. You see, I do like what Abrahms did with Star Trek, but my main problem with his version is that he doesn’t want the movies to be their own thing. He kept relying on Nimoy to come in and play future Spock, instead of creating his own thing. JJ Abrahms is a great producer, but he’s much better when he’s playing with his own toys, like in Lost, Cloverfield, or Super 8. (I never watched Alias, by the way) So I wasn’t sure. But I decided to do what I always do, give the new guy a chance.

END_OF_DOCUMENT_TOKEN_TO_BE_REPLACED

Now we come to the only prequel that seems to receive positive opinions. I’ve even heard people say you should just skip Phantom Menace and Attack of the Clones and just watch this one. I disagree. Both movies do set this movie up, and let’s not forget the original trilogy wasn’t perfect.

Anakin and Obi-Wan’s relationship has taken a turn for the worse. His romance with Padme is far from secret, and now he has a child on the way. But dark visions plague him–he sees again and again that his wife will die during childbirth. Anakin has never really gotten over the death of his mother, and still wants to find a way to stop people from dying, as he had promised in the previous movie. And now Palpatine is offering him a chance to fulfill that promise.

END_OF_DOCUMENT_TOKEN_TO_BE_REPLACED

The Phantom Menace, despite what people said about it, actually did well at the box office. This is why I say Star Wars can do no wrong. They can make a movie that is almost universally considered one of the worst movies ever, and it can still make great returns.

In the original trilogy, Empire Strikes Back was darker than A New Hope. Temple of Doom is the darkest of the Indiana Jones movies. That pattern continues here as well. And it seems George Lucas learned from his mistakes in The Phantom Menace. I could see why he wanted total control over these movies. Even though his name was still associated with the original trilogy, Lucas had people that would tell him if his ideas didn’t work. Here, he doesn’t have to worry about that. I’m not saying that’s a good thing, but I’m saying I can see his reasoning.

One thing I like about this movie is that Jar Jar Binks is barely in it. He’s not the overbearing klutz he is in the previous movie  He still makes mistakes, but it’s more frightening because Emperor Palpatine doesn’t even have to use Jedi mind control to coerce him. In fact, a lot of the deception that Palpatine weaves is done through his own charisma, not mind control. That’s why he’s such a great villain. He knows when to use his powers and when not to.

I like that the relationship between Obi-Wan and Anakin has matured to the point where they’re now trading witty banter. I especially love the scene where Kenobi laments to Anakin “Why do I have the feeling you’ll be the death of me?”

END_OF_DOCUMENT_TOKEN_TO_BE_REPLACED 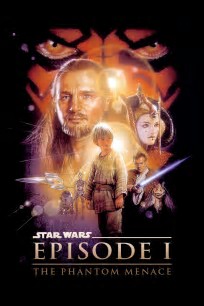 The prequels are often considered the worst part of the Star Wars saga. In fact, many fans would like to pretend they don’t exist. As I said in my review of Harry Potter and the Cursed Child, fans don’t get to decide what’s canon. The films exist and it’s time someone said something positive about them.

Let’s get the negatives out of the way because they’ve been said to death. Was Jar Jar Binks annoying? Yes. Was Jake Lloyd bad? Yes, but so was everyone who treated him so badly afterward. Hate the film, that’s fine. but don’t tear down a kid like that in the process. Were the midichlorians a bad explanation of The Force? Yes, actually I would’ve preferred no explanation at all. The Force is magic, and magic isn’t cool once you explain how it works. It ceases to be magic at all.

END_OF_DOCUMENT_TOKEN_TO_BE_REPLACED

Not only did Star Wars change how movies were made, but also how they are marketed.  Remember that while VCR’s and Cable TV were around in the 1970’s, it would be quite some years before either became as prominent as they would in the 80’s and 90’s. In fact, Hollywood was completely against cable television and ran ads in movie theatres (and ironically enough, on TV) telling people how bad an idea Cable Television was. They were worried that more channels meant that cinemas would receive less money from people.  Toy makers saw little value in making toys based on movies. They didn’t have the staying power as TV shows or comics, once the movie was gone from theatre, it was believed the toys would not sell anymore.

George Lucas wanted to change that. He had to, because he’d spent so much money on A New Hope’s effects that he had to find some way to compensate. He did it with licensing. And not just toys, but later, comic books, tie-in novels–all kinds of stuff. It was, as the Star Wars parody Spaceballs famously put it, “Where the real money from the movie [was] made!” In fact, Kenner was the first toy company to even take the risk. I had some of these. I had the Emperor’s Guards (who started working for Skeletor after I got them because I figured “well, they had to get work somehow”), some Stormtroopers, and of course Luke Skywalker, Yoda, and even Wicket. (Yes, I liked the Ewoks, so what?)

END_OF_DOCUMENT_TOKEN_TO_BE_REPLACED

Return of the Jedi was meant to be the end of an era. For the most stubborn of the Star Wars fans, it is the end, as some want to pretend the prequels never happened. It is the conclusion to Luke’s journey and the closing of an epic tale.

This is my favorite movie in the entire saga, yes, including the prequels. While I admire the risk taken by revealing that Darth Vader is in fact Anakin Skywaler, to me Jedi is better because it is the next step. Having a big reveal is one thing. What is an even bigger risk is going forward with that reveal and letting it alter the course of the story.

There are drastic changes as a result of the story. Lando Carlrissian, a former friend of Han Solo, has now joined the Rebellion. Apparently in the time between Jedi and Empire, Lando wanted to make amends for sacrificing Solo for the sake of allowing Cloud City to remain neutral. Seeing his friend encased in carbonite causes him to realize he cannot sit idly by and hope that someday the Empire will be overthrown.  He spent the last half of the movie helping Leia to escape Cloud City. He takes the next step in his atonement and joins the rebellion.

Han Solo is no longer neutral either. There were hints early on that Solo wanted to join the rebellion like the rest of the heroes. However, he couldn’t as long as Jabba the Hutt was alive and threatening his life. He’d be endangering his friends because every bounty hunter would be gunning for him. But when Leia murders Jabba, that threat is lifted and now Solo can be the hero he was meant to be.

Yoda is now close to death when Luke meets him once more. The once courageous and eccentric mentor is now no longer needed and he faces death with dignity, as Obi-Wan Kenobi did before him. But before he passes away, he tells Luke the truth. Obi-Wan explains that they did not keep the truth from Luke because they felt he could not handle it, but because they didn’t want him to make the same mistake Anakin did. Even if he is doing a good thing by confronting Vader, if he lets his emotions cloud his judgement, it will be all the more easier for the Emperor to manipulate him. And he almost succeeds.

END_OF_DOCUMENT_TOKEN_TO_BE_REPLACED

For many Star Wars fans, The Empire Strikes Back is the definitive movie of the franchise. Although the franchise debuted in 1977, Star Wars really feels more like a byproduct of the 80’s than the 70’s. That’s how ahead of its time the original movie was. It not only secured the franchise as a permanent part of our culture, but also secured George Lucas’s place as a filmmaker. For better or worse, Star Wars defined him. Even when he tried to do a different movie later in the 80’s, Willow, it paled in comparison to Star Wars. Yes, he also helped make the Indiana Jones franchise. but that was a collaboration with Steven Spielberg. Star Wars was the more definitive movie.

Although I enjoy the series as a whole, Empire is not my favorite of the series. Which one is? You’ll find that out next time. That doesn’t mean I don’t like the movie, far from it. I just don’t enjoy it as much as everyone else does.