I opened my Facebook this morning and discovered that Suzanne Wright, one of the founders of Autism $peaks, has died of pancreatic cancer at the age of 69. I knew right away that I had to make a blog topic about this.

I am not sure how I should respond to this. Autism $peaks is an organization that is misunderstood by the press and vilified (and rightfully so) by the autistic community. Despite their motto being “It’s time to listen”, they have not once listened to the people they claim to represent. Their platform has always been not helping autistic people, but curing them of autism. They see autism as a disease. They do not wish to understand us. The only way to truly “cure” a person of autism is for that person to not exist at all.

Suzanne Wright started her organization because her own grandson was diagnosed with autism. She felt as though autism had taken her grandchild away from her. But that’s the thing–people like her do not realize that EVERY child is difficult to raise. Would it have been better if her child was born without autism? Not necessarily. Her grandchild would still have difficulties and struggles. And the child would have been a completely different child. END_OF_DOCUMENT_TOKEN_TO_BE_REPLACED

As many of you know from my other two articles about Peanuts, it’s one of my all-time favorite comic strips.  My favorite character is Linus Van Pelt, the middle child of the Van Pelt family. In fact, I think he may be autistic.

Of all the characters in the strip, Linus seems the most intelligent. His dialogue is often prone to monologues. He will go on talking about any topic he is most interested in, especially the Great Pumpkin, baseball, or the Bible.  In the Christmas special, he’s the only one who still knows the true meaning of the holiday–everyone else is too wrapped up in the frivolity and consumerism.  In Halloween stories, he’s the only kid who believes in the Great Pumpkin, and the rest of the kids often ridicule him for this. His interest in baseball rivals that of Charlie Brown’s.

Linus’s biggest weakness is his “security blanket”. He’s rarely seen without it, often sucking his thumb while holding it. Perhaps holding it gives him comfort, like holding a stuffed animal does for some children. Whenever Lucy tries to break him of this habit, he will become anxious and panic. Lucy is the only person who even tries to separate him from his blanket. (Well, there’s Snoopy on some occasions, but he just does it as a prank if nothing else.)

END_OF_DOCUMENT_TOKEN_TO_BE_REPLACED

I’ve reached another milestone. This will be my 200th post. I’ve decided mark this occasion by presenting an interview with someone I will interview in the future and allowing him to ask the questions, rather than the other way around. I figured this would be a great way for new readers to know me better. 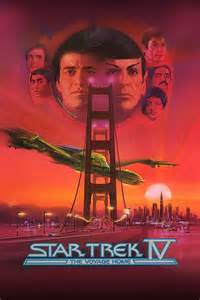 After the events of Search For Spock, the Enterprise is destroyed.  The crew is put on trial for what happened in the previous movie, but they cannot continue the trial because a probe has been detected. The aliens who sent the probe are sending signals similar to whale-song.  However, in the future of Star Trek, whales no longer exist.  The crew realizes they must travel back in time to find two humpback whales and bring them to the future to answer the probe and repopulate their species.