Patron: France (along with St. Therese of Lisieux). She is also known as the Maid of Orleans.

Joan of Arc is one of the most compelling saints. I know a few Catholics (and one non-Christian) who consider her an admirable figure in history.

She was the youngest of five children in a peasant family. When she was twelve years old, she had her first vision.  It was eventually revealed to her that she would aid the Dauphin and save France. She was laughed at by Robert de Baudicort, the commander of Vaucoulers. But when her prophecies came true, she was sent to the Dauphin. After a n examination cleared her of heresy, she was allowed to lead an expedition to relieve Orleans.  She had two  victories and on July 17, Joan was present at the crowning of Charles VII. She failed to capture Paris the next month and was captured sold to Britain.  This resulted in her trial for charges of heresy and witchcraft.  She was eventually burned at the stake.  But in 1456, she was declared innocent by Pope Callistus III and canonized in 1920.

To me, Joan is a compelling figure because of her unwavering faith and duty to God and her country.  She didn’t care if people believed her.  She didn’t care that she would be deemed a heretic.  Some might see the declaration of heresy as proof of the “error of religion”, as she was not believed, but think about it: would you believe her? If she told you “I had a vision that I would save France”, wouldn’t you scoff too?  She knew what God wanted of her.  We have to stand up for what we believe in, even when others think it is wrong.  That is what Joan of Arc means to me, not the crime that was committed against her.

With Father’s Day coming up, I decided I should talk about my dad. I talked about my mother on the Friday before Mother’s Day, so why not?

My dad has spent most of his life in Louisiana, as have I as a result. He was born in the 50′s and is definitely a product of that time. However, I often joke that he should’ve been born in another time. The reason I say this is he is obsessed with history. He seems to enjoy stuff about the Civil War and World War II the most. He also spent a good part of his life in the Navy. Because of this, he actually went to Antarctica for a while. That’s something neat: I can think of no one else I know I can say that about.

My dad’s current profession is bricklaying, and I help him with it. In fact, it’s pretty much the only job I’ve had. He’s a difficult person to work with, but I try my best.

My dad goes through a lot to help support us. Around here, work has its and downs, especially with the current state of our economy.

My dad’s really the outdoors type. He took me fishing, but it soon came to light that I am not the type of person for this. We did go camping when I was little, and I did like that, but fishing just bored me. My dad soon gave up on that, and now when he goes, I don’t and he doesn’t seem to mind. He’s also very much into sports, especially football. It will probably not surprise you that he is a fan of the New Orleans Saints, and has been pretty much all his life. I don’t watch football much, except for the Superbowl.

What I like best about my dad is that he puts up with me. I have a hot temper, and it makes me difficult, but he tolerates me. I am not a model child, and he knows it. I have to live with my parents because I am not financially able to support myself, so it’s great that my parents can support me. In fact, to be honest, I often worry what it’ll be like if they pass on before me, which I’m convinced will happen.

Note: This is a review of the graphic novel published by DC, not the webmanga. 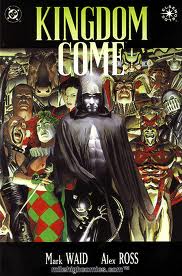 Summary: It is the distant future. The superheroes of old have aged. A new war is waging and the lines between good and evil are blurrier than they have ever been Superman has exiled himself from Metropolis. Wonder Woman has been exiled from her ancestral home. The Flash moves so fast, now he can’t even stop! Batman has turned Gotham City into a police state patrolled by his “Bat-Sentinels.” But has the world truly changed for the worse.

Review: I love superhero comics since I learned to read. Since DC owns Batman. I became a fan by default. Batman’s use of both brains and brawn, coupled with his realistic origin, truly made me a fan.

The two people who created Kingdom Come are no strangers to comics. Mark Waid is most well-known for his work on The Flash.  Alex Ross’s painting so gorgeous, they’ve become museum pieces. I’d been a fan of Alex Ross back when and Kurt Busiek created Astro City, so I already knew how good he was.

I thought it was great how the DC Universe, was reimagined. Superman believed his holographicfarm was more real than teality. I loved confrontation and Magog, Metropolis’s new protector.  Magog even gone so far as to kill The Joker. He even got himself acquitted. The confrontation between Superman and Magog’s line “The world changed, but you wouldn’t. So they chose me.  They chose the man who would kill over the man wouldn’t.” got to the heart of what defines Superman the most to me–not his powers, but his heart.  Superman is, at the end of the  day, the person, we aspire to be. That is why he cannot take a life.

I also thought it was great how the legends lived on. Several heroes had passed on their mantles by the time the story started: Nightwing, The Flash, and even lesser-known heroes, like Mr. Terrific (yes, there’s a superhero with this name)were reimagined.  Waid even remembered Superman’s other weakness and turned Captain Marvel, whose powers are magic-based into the perfect anti-Superman, under the control of Lex Luthor.

All in all, I truly enjoyed this graphic novel. Some great pictures and a resonating story to go with it. 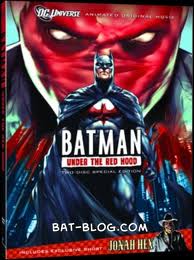 Summary: A new figure known as the Red Hood has arrived in Gotham and is targeting the Black Mask, a druglord with a very hot temper.  The Red Hood is actually Jason Todd, the second Robin.  There’s just one problem: Jason Todd is supposed to be dead! The Joker killed him five years ago!

Review: For those who don’t know who Jason Todd is, allow me to provide some background. During the 80’s,  DC decided it was time for Dick Grayson, the first Robin, to grow up. This led to the creation of Nightwing. But fans still like the Batman and Robin team, so they created a new Robin, Jason Todd.  That plan backfired, and the fans hated Jason Todd.  So DC killed him. But this is American comics, they love to bring back dead characters. I wasn’t too fond of Jason Todd myself.  I felt that he was too headstrong to be Batman’s partner.

What I really thought was great was that the movie showed us the dichotomy between Batman and the Red Hood.  The Red Hood is almost like a villain himself. He actually creates his own drug ring and even convinces some of the Black Mask’s “associates” to join it.  What’s more–he uses guns.  This is never Batman’s way.  He never does things that underhanded, nor would he use guns.

We’re also shown Jason’s evolution.  As a kid, he was wide-eyed and enjoyed every minute of being Robin.  But as he got older, he began to realize there was no way they could completely stop crime. Every time they put someone in jail, they’d eventually be back out on the streets.  This frustrated him, causing him to resort to more drastic tactics, frustrating Batman. It was great to see the seeds of what created The Red Hood.

My main problem is minor.  Nightwing is barely in this.  Once he gets sidelined, he’s written out of the story.   I wanted him in for the whole movie. At least we got a very funny moment.  After several years, someone finally called Batman on his infamous “disappearing act”.  If you’re a fan of Batman, you know the drill. Batman will be talking to someone.  Then that person will say something and Batman will have already left, leaving the person talking to himself.  Nightwing complained about this at one point, saying “Could you just once say ‘Let’s get in the car? Would that be so hard?'”

As a final analysis, I really think this is one of the best Batman direct-to-video cartoons, and I would recommend it to any Batman fan.