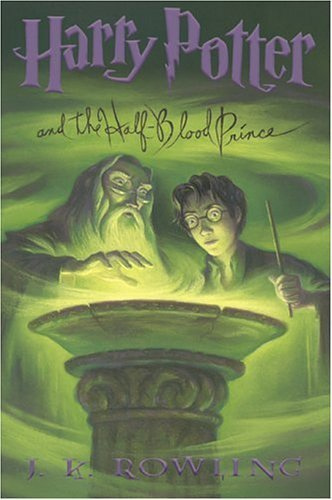 We now come to the second-to-last book in the series.  For many Potter fans, including myself, this one was a whopper.

The first item I want to talk about concerns Harry discovering a book that inscribed “Property of the Half-Blood Prince”. Hermione is rightly concerned about the book.  After all, the last time they found a mysterious book, it possessed Ginny with a remnant of Voldemort.  If that weren’t enough, the book seems to have dark secrets in it. But Harry seems to give it up, because it’s been helping him in Snape’s class. In this book, Snape has finally achieved his dream–he is now the new Defense Against the Dark Arts instructor.  We also discover that he is a double agent, working for both Dumbledore and Voldemort.  Hermione actually has the right idea–we should never trust anything that seems to go against our conscience.

We finally learn Voldemort’s childhood.  He was the son of a witch and a Muggle. His mother continuously gave his father love potions to keep their marriage alive, meaning that it actually was not built on love. When they had a child, Tom Riddle (Voldemort’s real name), his mother thought that would mean the love would come naturally and stopped using the potion.  Sadly, it never did, and only hatred came instead. Tom was later found by Dumbledore in an orphanage.  He never forgave Muggles for the way his father treated him. This is another of the contentions I have against the claims that Harry Potter is evil: The idea that children need love to survive is a basic teaching of Christianity.  Harry is strengthened by the relationships he shares with his friends. Perhaps the best example is Ron’s mother. Ron has a huge family, yet his mother treats Harry as if he were a long-lost son and becomes a sort of surrogate mother to the boy. And considering the actual surrogate family Harry has, that’s a good thing. I have often doubted that those who oppose Harry Potter books have even read the books critically or at least with an open mind.

And finally, we have Dumbledore’s death.  Looking back, I guess this was necessary.  In many quest-based stories, the mentor has to die so that the hero can own the story: Star Wars, The Lion King, and numerous others often has this moment. Without it, Harry is not forced to continue.  Now the deck is stacked even greater, as he has one less ally to rely on. 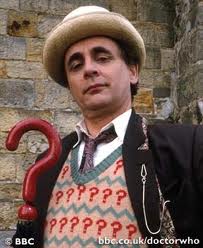 Colin Baker was sadly the first Doctor to be fired. He was offered to come back to pass the torch on, but refused because he was understandably bitter about the whole affair. And who was it passed to? Sylvester McCoy, who would become the final doctor of the Classic period.

Sylvester’s real name is Percy James Patrick Kent-Smith and is of Irish decent.  He got his stage name while working on the Ken Campbell Roadshow. It was a character he portrayed; when a reviewer mistook the joke in the show’s credits for a real person, the name stuck.  In 1979, he had a role with Laurence Olivier in Dracula. He was mostly a stage actor prior to and after Doctor Who. After Doctor Who, McCoy appeared in the BBC Radio 4 series Cabaret of Dr. Caligari. He appeared as the Sheriff of Nottingham in a Robin Hood musical. He worked with the Royal Shakespeare COmpany, where he played alongside Ian McKellan (Gandalf in Lord of the Rings) in King Lear in 2007. He is currently starring in Peter Jackson’s trilogy of Hobbit movies as Radagast.

Sylvester McCoy was my second-favorite Doctor until David Tennant assumed the role (now he’s my third-favorite). The Doctor’s start as a bumbler didn’t appeal to me, but the darker path under Cartmel certainly did.  This Doctor was a brilliant planner, strategizing much like a chess player and wasn’t above using people as pawns if necessary. It’s a shame we didn’t get to see the full scope of Cartmel’s plans.

I HATE Mel! She’s not pretty in my opinion. She’s annoyingly condescending and utterly useless.  And her voice is the worst. I don’t think there is any companion I could hate more, except maybe Dodo.

I love Ace! She’s so much fun!  She has a unique relationship with the Doctor, who she calls “Professor”. She has a penchant for blowing things up, and that’s the best thing about her.  But she also has a tender side, as seen in “Ghost Light.” According to the Sarah Jane Adventures episode “Death of the Doctor”, she now runs a charity called A Charitable Earth (get it? ACE?)

This is Mel’s final story, and it’s great to see her go. We also see an appearance of Sabalom Glitz, who was last seen in “Trial of a Time Lord”. The whole story is great, and we even see hints of the darker direction that would come in the following season.

“Remembrance of the Daleks” (4 episodes)

The Doctor goes back to the day it all began and finds himself in the middle of a Dalek civil war.  It’s also the first time we see a floating Dalek! Oh, and Ace gets her best moment in the show: destroying Daleks with a baseball bat and a rocket launcher. Aw yeah.

“The Greatest Show in the Galaxy” (4 episodes)

The Doctor becomes an unwilling participant in an intergalactic circus where he must entertain the gods or die.  The story was meant as a criticism of the fans who were becoming more and more disinterested in the show.

This is the final story to feature The Brigadier and takes us back to Arthurian England. It’s really sad that we didn’t get to see more from the Brigadier, even in the modern version (but at least he appeared in an episode of The Sarah Jane Adventures.

One of my favorites! The Doctor and Ace go to a haunted house she visited as a child. The story was a victim of meddling, but it’s still well-written, albeit confusing.

I might as well include the final Classic Doctor Who story. It includes an excellent performance by Anthony Ainley, proving that yes, with the right script, he can be a great villain.

This is the first story to feature the Seventh Doctor, and sadly it’s one of the clumsiest episodes of the show.