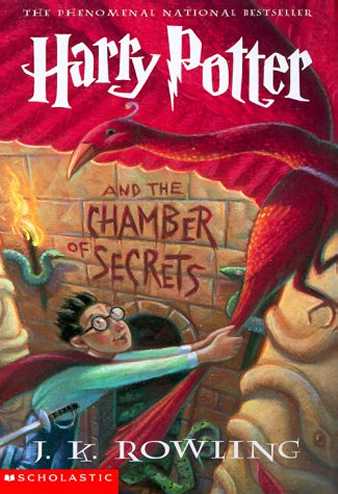 The Chamber of Secrets is actually one of my favorite books in the series. We get a glimpse into Voldemort’s childhood. Ginny Weasley, who made an early-bird cameo in Sorcerer’s Stone, becomes a full-fledged character.  We also meet three new characters: Gilderoy Lockheart, Lucius Malfoy (Draco’s father) and his House-elf, Dobby. We love Dobby.

The Basilisk is an interesting creature.  In folklore, the basilisk is the king of the serpents.  They can be killed, but there’s a catch–if you look directly at it, you’re turned to stone.  Thanks to the basilisk, we learn Harry Potter can speak parseltongue.  When the basilisk begins petrifying people, everyone immediately begins to suspect Harry is controlling it because he hates his “muggle” (read: non-magic users) family and their suspicions are confirmed when they discover his secret.  This secret also is one of the reasons the anti-Harry Potter crowd used in their claims that the books are demonic.  But consider this: if Harry talking to a snake is demonic, then half the human population is evil–Eve also talked to a snake.

No, I think we can glean something else.  Parseltongue is a talent.  The Sorting Hat even tells Harry that this talent almost made it consider putting him in Slytherin instead of Gryffindor.  In the gospels, Jesus relates a parable about three stewards given talents by their masters.  (Matt 25:14-30) In Biblical times, talents were a unit of currency rather than a  skill. If you were a steward in Jesus’s time, it would take you at least fifteen years to earn just one talent. In the parable, one steward gets five talents, another two, and the last only gets one.  The steward who received five talents invested them and gets five more. The steward who receives two talents also invested them and got two more. But the one who only got one talent held on to it selfishly, and was punished by having to give it to the steward who now had ten talents.  To put this into modern-day perspective, imagine that they were each given thousands of dollars. Now do you see why the person had only one talent was treated so harshly?

I believe what Rowling is trying to show the reader is that your actual talents doesn’t matter–what matters is how the talent is used.  Voldemort used his talent to kill students born of muggle parents. Harry however, uses his talent confuses the basilisk and saves everyone.

Dobby the House-elf is one of my favorite characters, but he didn’t start out that way.  His constant efforts to “save” Harry Potter from Voldemort and Lucius really did more harm than good.  So why do I like him?  Because when Harry frees Dobby, Dobby stands between him and Lucius. Lucius is too dumbfounded to react.

As a final point, there’s Gilderoy Lockheart, the new Defense against the Dark Arts teacher.  Throughout the book, we hear him talk endlessly about the grand things he’s done.  But Harry, Ron, and Severus Snape doubt him.  When he quizzes pupils about his books, it’s always about inconsequential things like his favorite color or his favorite sweets.  We later learn that Lockheart has actually taken credit for the works others have done.  This is a violation of the Tenth Commandment, against bearing false witness. After re-reading this book for this post, I have to say this: I am SO glad we only had to put up with him for this book. If there were 5 more books with him, I don’t know if I would’ve been able to take it.

Our next part will deal with another one of my favorite books in the series, The Prisoner of Azkaban.

4 thoughts on “A Christian Muggle part 2: The Chamber of Secrets”