This time, I’m talking with Tracy O Quinn. She is a moderator at fans for Christ, a message board for Christians of all types. It also has a Facebook link. 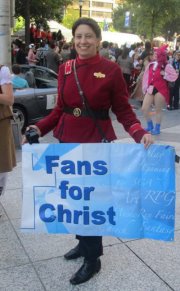 1. How did you become a Christian?

My answer is kind of messy. It really seems now that I was called by God any number of times. I used to beg my family to take me into the ‘pretty buildings’ with the stained glass, I wanted to see inside there badly. I did not know they were churches or what went on in there. I was always interested in God and seeds were planted all my childhood and teen years. I went to Salvation Army summer camp, friends at school would invite me to their church with them. After I graduated high school I bought myself a Bible and started reading it. I said a prayer asking for salvation at home and then found a Christian church denomination, asked their pastor to baptize me. However I immediately back slid and looking back on it I think I liked the ‘idea’ of becoming a follower of Christ or perhaps I did not understand the reality of allowing Christ to make a permanent change in my life. Although I attended church off and on I did not really get become ‘born-again’ until I was dating my husband and he started taking me to church with him. It was at the House of Worship in Jesup,  GA in September of 1994.

2. What reason would you give for believing in God?

I found that when I really opened my mind and searched myself, that indeed it was just like the preachers and teachers said- there was something missing, a God-shaped empty piece of myself that only He could fill. I felt God, in a tangible way at that moment. It was kind of like the Matrix and I took the red pill. I now could see everything prior to that moment with new eyes, that everything in my past was basically leading up to this moment and that I had not been alone. The Father and Son had been there all the time, patiently calling me. It may sound trite to someone else, but its true.

3. Is there anyone in your life who inspires you to be a better person? Why?

There have definitely been people that have influenced me and inspired me. It changes as time goes by, so I do not have specific people to name at this moment. Really I think the fact that I tend to be so inspired by hero stories, and characters willing to sacrifice for the good of others is why I am such a geek. I love movies about heroes, and I love super hero comics. I love fantasy like Lord of the Rings because of all the rich hero characters. I find it inspiring when heroes turn out not to actually be very heroic most of the time, but they are able to rise to the occasion and put the safety and well being of others before themselves when the time comes. That means there is hope for even someone like me to be heroic too! I cannot say which came first, my love for Jesus who is the ultimate hero or my love of heroes and hero stories. They are so intertwined and a part of me I cannot untangle them. Perhaps, somehow, it is both!

4. What’s your favorite Bible verse and why?

My favorite verse is Micah 6:8. “He has shown you, O mortal, what is good. And what does the Lord require of you? To act justly and to love mercy and to walk humbly with your God.” I really feel like this is a very succinct way of explaining exactly what our Christian walk should be like. It is worded perfectly, includes everything. Once we read it, we can dissect it and pull out all the deep meaning in each word. But it covers it all, at least in my opinion.

5. What is your current profession?

I am an Operations Manager at the Atlanta dispatch office for a trucking company called Roadlink Intermodal Logistics.

I don’t really have one. It might be because I never went to Sunday School or anything as a child. Jesus is my favorite person in the Bible, his compassion, mercy, faithfulness and patience are things that continually inspire me. I will say that it does my heart good to see that in the Bible God is clearly able to use flawed individuals, because I am definitely one!

7. What was your childhood like? Did it influence your faith in any way?

My family were not church goers although all my older siblings went to Catholic School. We were originally from the Bronx NY. My parents were alcoholics and I was the last of 6 kids. My sister who was 11 yrs older than me took me in and raised me as her own when I was 8 years old. We moved to central Florida which was a huge change for me. I never really knew my parents. My father was gone most of the time and then he moved out. My mother was busy and out quite a bit, I found out later that she was probably drinking somewhere. When she was at home she slept a good bit. I was left on my own a bunch and my sister Linda and brother Tony (the other siblings were out on their own by this time) would get home from school and I would be there alone. The whole family seemed to be real bitter towards the Catholic church, but I guess that was because of their experiences at Catholic school. They were apparently traumatized by punishments that Priests or Nuns would dish out and by some of their behavior. It probably also had to do with the fact that life at home was awful for all the kids, and there seemed to be no help for them even at the church. I was born in 1967, so it was a different time in America then. I don’t think the same situations would be so patiently ignored as none of their business by any church or school today. I grew up being influenced against church mainly. Even the few times my sister would take the family to a church it would end badly, with her getting her feelings hurt or getting scared by the preaching that all us kids were going to hell because of things she did or didn’t do, then there was the Pentecostal church that got so loud and rambunctious we left shortly after it started and even as a kid I was traumatized by it! So it may be that all of this is what led me to taking so long to really fully open up to the power of God in my own life.

8. What denomination are you?

I have attended different churches over my adult life. As I felt led, in the different areas I may have been living at the time. Right now, I have been attending a Church of God for about 12 years. They are Pentecostal, but our church is very ‘mild-mannered’ for a Pentecostal denomination.

2 thoughts on “One Faith, Many Paths: Tracy O Quinn”