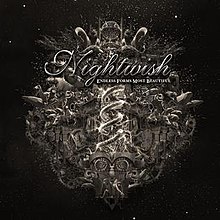 During the tour for Imaginaerum, Anette Olzon fell ill and was replaced by Elize Ryd and Alyssa White-Gluz. A day after what would become her final performance, Olzon posted that she didn’t like being replaced without being consulted. She was then fired, and current vocalist Floor Jansen replaced her for the rest of the tour. (Troy Donockley also joined the band during the tour as well) After the tour, Jukka Nevalainen left the band due to insomnia. He was replaced by Kai Hahto (of Wintersun and Swallow the Sun). This was the first album with the current roster of the band.

Endless Forms was inspired by the theories of Charles Darwin and Richard Dawkins. Dawkins guest stars on two songs.