In 2015, Sesame Street introduced an autistic Muppet named Julia, their first new Muppet in years. When I saw this, I was cautiously optimistic. They had aligned themselves with two groups, ASAN (the Autism Self-Advocacy Network) and Autism Speaks. This was a cause for concern, as one company is actually run by autistics, for autistics. The other is a hate group. Let’s not mince words, that’s precisely what Autism Speaks is.

It seemed at first that ASAN was the group they were listening to the most. Julia was made into a girl, which was a great idea. Most of the time when an autistic character is depicted, they are usually boys. This would be an ideal way to show the audience that both boys and girls can be autistic. Having her be friends with Elmo, Abby Cadabra, and Big Bird was also a great idea, as all three characters are popular with the children who watch. They showed both the strengths and weaknesses of autism, and did not seem to depict it as something terrible, just something that made Julia unique. Her puppeteer was even someone who had an autistic child. And she also had two rods for her arms so she could stim by flapping them.

And then, the one thing we did not want happened. Both ASAN and Autism $peaks were donating money to PBS. However, it seems as if Autism $peaks was probably donating more than ASAN. Also another problem was that more people know about Autism $peaks than ASAN. Both of these factors led to a decision that Sesame Street would continue to do business with Autism $peaks. ASAN recently announced that they had to terminate their partnership.

This angers me so much. I grew up with Sesame Street in the 80’s, when PBS was really taking off with children’s programming. They had great programs like Square One TV, 321 Contact, Nova (which wasn’t really a “kids” program per se, but I think I remember it being used in schools sometimes), and Mr. Rogers Neighborhood. I watched all of these religiously, even into my elementary school years, when most children outgrow them.

Here’s the real reason I’m upset. See the woman pictured above? That’s Linda Bove, who joined the cast of Sesame Street in 1972 and left the program in 2002. She was often accompanied by a giant sheep dog Muppet named Barkley, pictured below. At first, Barkly was Big Bird’s pet, but eventually and at the time I started watching, he became Linda’s. 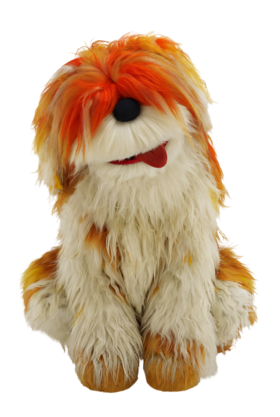 This is what makes me so angry. If Sesame Street could be so revolutionary to have a character like Linda on the show, who happened to present her disability in a positive light, why could they not do the same for Julia? And don’t give me that garbage about Autism $peaks donating more money. They could still have done the right thing! It’s not hard! They could have taken a few seconds to go on Google and look up what REAL autistic people are saying about Autism $peaks! We all know just how awful the organization is. We know their dirty little secret. But no, they had to follow the money and go with the organization that has never listened to us, even though they say they do in their motto.

This could have been a great move for Autism Advocacy. Sesame Street has entered its 50th anniversary on television, and has educated children for generations not only on things to prepare them for school, but also social skills that are often not taught in schools. Representation is important! We need it to show children that autism is a positive, not a negative. It’s not debilitating.

Let me give you an example of the latest thing Autism $peaks is doing. In their latest propaganda, they are suggesting to children that they approach autism through the famous “five stages of grief”. They are to “blame the autism” when a child misbehaves, rather than try to reinforce a more positive approach. The “five stages of grief” are often applied to death. They are essentially saying that autism is a death sentence! It’s been over ten years, and they have not changed at all! Even the death of their founder has not changed their mission. They are still just as interested in eugenics as they were when they founded. Heck, at one point they even aligned themselves with the Sons of Odin, a white supremacist conglomeration, and even had them as sponsors on their website until people called them out on it, and now they ended it because they knew more people would suspect that they weren’t as charitable as they want you to suspect they are.