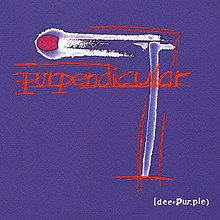 Ritchie Blackmore left Deep Purple after The Battle Rages On. In 1997, he met Candice Knight, which eventually led to them forming the folk music group Blackmore ‘s Knight. He was replaced by Steve Morse, who had a band called the Dixie Dregs. He also joined Kansas in the 1980’s. In addition to these, he’s also worked with Angelfire and the supergroup Flying Colors.

Purpendicular had 2 singles: “Sometimes I Feel Like Screaming” and ” The Aviator “. It reached #58 in the UK, but did not chart in America. It was produced by Darren Schneider and Keith Andrews. The album is not on Spotify.

Final Verdict: An excellent start for Morse. Just because Spotify skipped it doesn’t mean you should. Check it out!