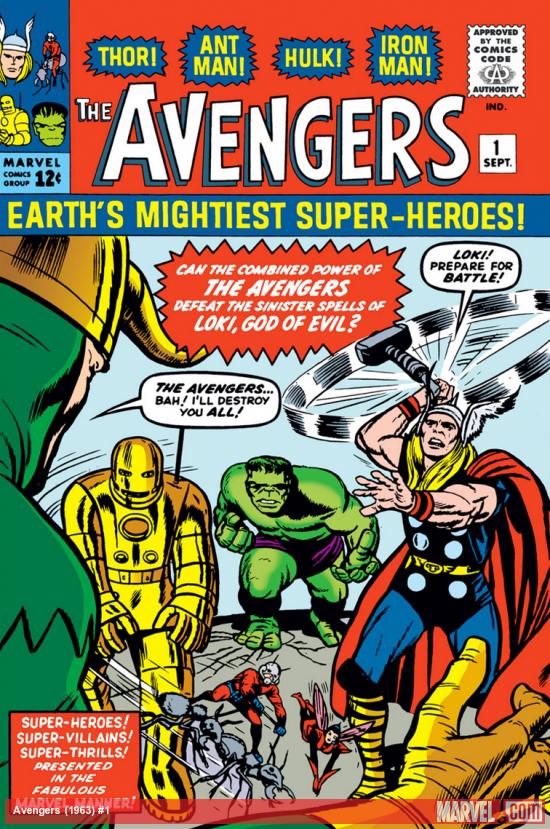 While the Justice League of America supposedly led to the creation of the Fantastic Four, I’d say the Avengers are the closer parallel. Like the JLA, all of the founding members were previously introduced in other comics. Both teams have had several roster changes over the years, while the FF are usually the same four members (OK, sometimes we’ve had changes like that one time She-Hulk joined for a while.) . The original roster, as pictured above, didn’t even stay unchanged by the next issue. Hulk would leave in the second issue, and none of the others even seemed to want him on the team. Wasp in particular was glad to see him go.

Issue #4 saw the return of Captain America. Namor had already returned as an antagonist of the Fantastic Four, and the fans seemed to want Cap as well. He then shared Tales of Suspense with Iron Man until its 100th issue, in which he’d finally get his own comic. We’d also see the debuts of three major enemies: Baron Zemo, his Masters of Evil, and Kang the Conqueror.

Issue #16 saw the first major change to the roster, as former villains Hawkeye, Quicksilver, and Scarlet Witch joined. Although Black Widow would be offered membership in #44, she wouldn’t join until the 70’s. Black Panther would become the team’s first African-American member, in 1968. We’d also see the recruitment of The Vision, Falcon, and Black Knight by the end of the decade.

Today the Avengers are almost as much of a flagship team for Marvel as the X-Men, buoyed by the successful MCU movies. Artists such as John Buscema, Sal Buscema, George Pérez, and Al Milgrom have all graced the pages, alongside writers like Roy Thomas, Kurt Busiek, and others. The team has even spun off to various fronts. But those are stories for a different time.