This time around, I’ll be discussing the Comics Code.
The history of the code begins in 1947, when Dr. Frederick Wertham began publishing articles that said comic books were leading to juvenile delinquency. He believed the graphic violence in EC Comics was encouraging violence. He felt that the feminist ideology of Wonder Woman was dangerous for young girls. (Her constantly being put in bondage probably didn’t help.) Probably the most ridiculous statement was that Batman and Robin were in an incestuous relationship. Parents became concerned, and laws against the sales were implemented. Comic book publishers formed the ACMP (Association of Comics Magazine Publishers), and wrote up a code with the following guidelines:
1. Sexy, wanton comics should not be published. No drawing should show a female indecently or unduly exposed,and in no event more nude than in a bathing suit commonly worn in the USA.
2. Crime should not be presented in such a way as to throw sympathy against the law and justice or to inspire others with the desire for imitation. No comics shall show the details and methods of a crime committed by a youth. Policemen, judges, government officials, and respected institutions should not be portrayed as stupid, ineffective, or represented in such a way to weaken respect for established authority.
3. No scenes of sadistic torture should be shown.
4. Vulgar and obscene language should never be used. Slang should be kept to a minimum and used only when essential to a story.
5. Divorce should not be treated humorously or represented as glamorous or alluring.
6. Ridicule or attack on any religious or racial group is never permissible.
The code was not a success. Dell Comics already had Disney’s own guidelines for their characters, and did not participate. Other companies, such as EC, ended their participation. Those who continued often did not even bring their comics to the committee for review (EC still used their code’s symbol, regardless of ending their participation.)
Wertham published “Seduction of the Innocent” , a collection of all the evidence and research he’d collected. Things got so bad that comic books were even being burned! With the ACMP dissolved, a new organization was formed: The Comics Magazine Association of America. 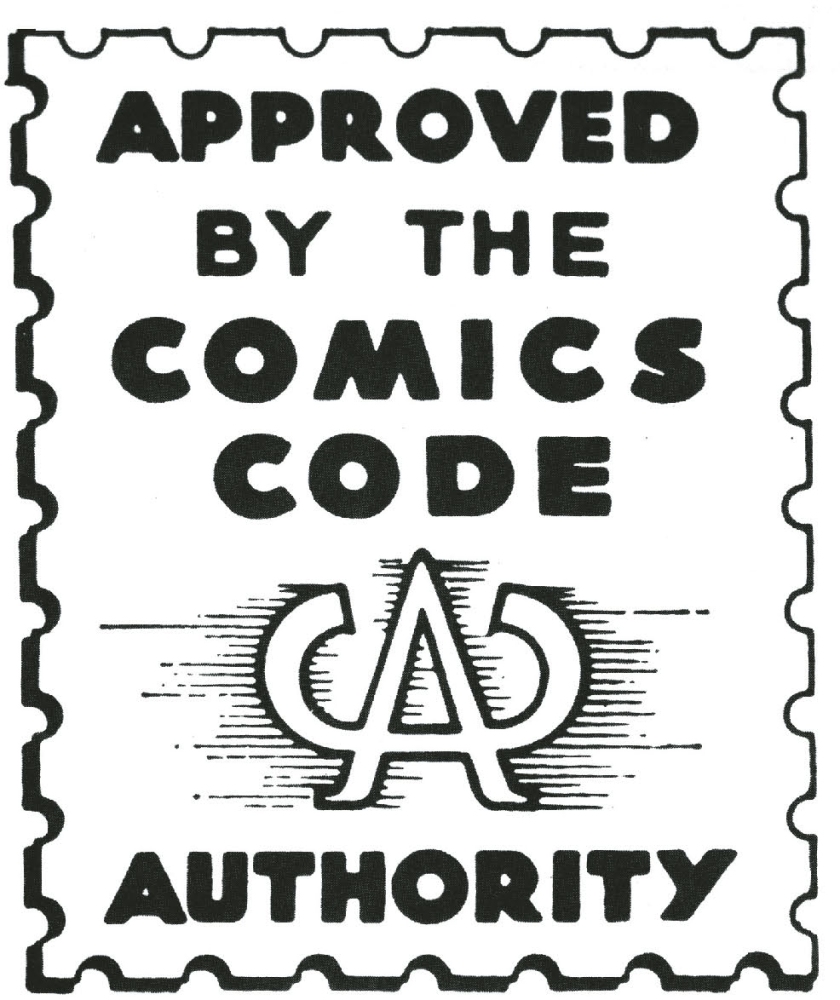 Formed in 1954, the Association was a voluntary alternative to government regulation. Comics were brought to the Association for review and those comics that were approved would have a seal on the front cover to let consumers know it was safe for children.

A new set of guidelines was drawn up. (Dell and Gold Key comics did not participate for the same reasons as before.)

1. Crimes shall never be presented in such a way as to create sympathy for the criminal, to promote distrust of the forces of law and justice, or to inspire others with a desire to imitate criminals.
2. If crime is depicted it shall be as a sordid and unpleasant activity.Policemen, judges, government officials, and respected institutions shall never be presented in such a way as to create disrespect for established authority.
3. Criminals shall not be presented so as to be rendered glamorous or to occupy a position which creates a desire for emulation.
4. In every instance good shall triumph over evil and the criminal punished for his misdeeds.
5. Scenes of excessive violence shall be prohibited. Scenes of brutal torture, excessive and unnecessary knife and gunplay, physical agony, the gory and gruesome crime shall be eliminated.
6. No comic magazine shall use the words “horror” or “terror” in its title.All scenes of horror, excessive bloodshed, gory or gruesome crimes, depravity, lust, sadism, masochism shall not be permitted.All lurid, unsavory, gruesome illustrations shall be eliminated
7. Inclusion of stories dealing with evil shall be used or shall be published only where the intent is to illustrate a moral issue and in no case shall evil be presented alluringly, nor so as to injure the sensibilities of the reader.I
8. Scenes dealing with, or instruments associated with walking dead, torture, vampires and vampirism, ghouls, cannibalism, and werewolfism are prohibited.
9. Profanity, obscenity, smut, vulgarity, or words or symbols which have acquired undesirable meanings are forbidden.
10. Nudity in any form is prohibited, as is indecent or undue exposure.
11. Suggestive and salacious illustration or suggestive posture is unacceptable.
12. Females shall be drawn realistically without exaggeration of any physical qualities.
13. Illicit sex relations are neither to be hinted at nor portrayed. Rape scenes, as well as sexual abnormalities, are unacceptable.
14. Seduction and rape shall never be shown or suggested.Sex perversion or any inference to same is strictly forbidden.
15. Nudity with meretricious purpose and salacious postures shall not be permitted in the advertising of any product; clothed figures shall never be presented in such a way as to be offensive or contrary to good taste or morals.

Some have suggested that the Code was created solely to put EC out of business. If you look at rules 6 and 8, you can see why. They can’t even use the same titles!

The code was continued into the beginning of the 21st century. Over the years, beginning in the 1970’s, the guidelines became less strict, and many small press companies were not required to submit their comics for review. Marvel and DC began to publish imprints such as Epic and Vertigo, which were geared towards mature readers. By the 2000’s, both Marvel and DC began to use their own ratings system, similar to those used by movies, video games, and TV. Archie and Bongo (which published comics based on The Simpsons) also eventually stopped. In 2011, the Code was finally dissolved, and to this day, companies use their own ratings systems instead.

Next week, I take a look at some of the serials that were based on comic books. These were the first movies to feature superheroes.

Next: Superheroes at the Movies