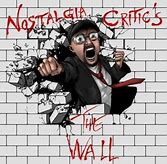 I used to be a huge fan of the Nostalgia Critic back when he used Blip to load his videos on his website, That Guy With The Glasses. He eventually changed it to Channel Awesome, to make you think he was getting more than just him. He was and he wasn’t. I loved the anniversary shows, where he’d get everyone who was on the channel with him. And then I heard about Change the Channel, and everything his former partners said happened. That made me stop.

And then I heard about his parody of Pink Floyd’s album The Wall and the movie adaptation. He’d even timed it good, because last year was the 40th anniversary of the release of the album (he actually had the video go up in September, not December when the album was actually released.) . As a Pink Floyd fan, I was angry about this. I have decided I will NEVER watch Doug Walker again, no matter what stunt he pulls again. He has gone too far this time.

Now I am not going to say Pink Floyd had the perfect discography. No one does. There are some Pink Floyd albums I don’t go back to. There are some that fans don’t celebrate as much as The Wall, Dark Side of the  Moon, or even Animals. I am not going to say The Wall is something everyone will like. But it is a celebrated masterpiece. I’m not saying you can’t parody it. But not the way Doug Walker did.

First of all, let me correct Doug Walker. The movie The Wall is not necessary for listening to the album. In fact, the movie and the album are 4 years apart. The album was not made for the movie. The movie is an adaptation of The Wall. It is not The Beatles’ Yellow Submarine or Help.

The Wall is not your ordinary album. (Well, it’s Pink Floyd. They don’t do “ordinary”) It’s a concept album. There are two kinds of concept albums. The first kind is where all the songs are around a specific theme, like Dark Side of the Moon or The Division Bell were. The second kind is a narrative, where all the songs are more like chapters in a story. The Wall, The Lamb Lies Down on Broadway, those are narrative albums. That needs to be understood before you listen. It tells the story of Pink, a musician who is descending into madness.

The video begins with Corey Taylor of Slipknot fame watching a VHS which is actually a reference to the way the movie begins. Corey Taylor is basically being Bob Geldof, for those of you who’ve seen the movie. He’s just there to sit and watch. I’m not going to rip on Slipknot here, because that’s not relevant to the discussion. So having Corey there to play a gag at the end doesn’t bother me. He’s there for a paycheck. I truly hope he doesn’t agree with Doug about this album, because that will make me think even less than I already do about Slipknot and their brand of “music”. (that’s the only rip I’ll do. I do listen to current music, but I tried Slipknot and they weren’t my thing. If you like them, more power to you.)

“Goodbye Blue Sky” gets a really bad parody on this. Doug Walker sings through most of the video, and I hate that. He is NOT a good singer. He has the gall to call Roger Waters pretentious and has a bird with the word “ego” to represent his feelings about him. Doug, if anyone has a big ego, it’s you. And that’s not me saying that, that’s your former partners as well. And as for the “Another Brick in the Wall”? He thinks it’s wrong to have all that Nazi imagery and use it as a comparison to school. He thinks Waters should just “grow a new pair of balls”, as he sings. Walker, the school system in post-WWII Britain was very abusive. The Nazi imagery is there because Waters’s dad died in WWII. He is lamenting about a father he never knew. You would know that if you even bothered to learn ANYTHING about the man.

And now to address the one part of the video that actually has nothing to do with The Wall, but really has to do with the controversy surrounding Doug Walker. The song “Hashtag” is meant to attack those who have every reason to criticize him. So this is no longer Doug Walker criticizing Pink Floyd. He is coming out after everyone who, in his mind, betrayed him. They didn’t betray him. They had good reasons to leave him and, frankly, he needs to confess to his part in the controversy.

I doubt one video, even with the HUGE amount of down-votes this one got, is going to hurt Doug’s channel. But one day, more and more people will drop his channel from their subscriptions. That will probably hurt him more than this video ever could. But Doug, you have crossed a line. And I am happy I no longer watch you.

One thought on “Nostalgia Critic: The Wall”