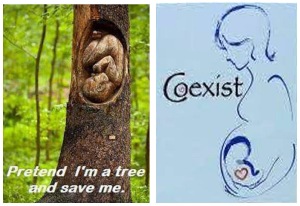 This year marks the 45th anniversary of Roe V. Wade. Planned Parenthood may consider it a moment to celebrate, but I do not. Over 55 million lives have been snuffed out by abortion. I don’t call that “safe, legal, and rare”, or “only 3%”.

I once knew a fellow student in high school who had Down’s Syndrome. Do you realize that 90% of children who are diagnosed with Down Syndrome are aborted? That’s not a made-up figure.

Forty-five years has not made abortion safer. It’s made it still as dangerous as ever, for both the mother AND the child. There is no safe way to have an abortion. If there were, the child would be spared.

I want you people to know something: I am an adopted child. My father divorced my biological mother, who wanted nothing to do with me, and remarried. I could’ve been aborted, considering what my biological mother thought of me. And yet, the way the media plays up Planned Parenthood, you’d think the mothers who are “consulted” by them are only given one option. Adoption is a much better option than killing a child because that child gets a chance he or she may not have had.

Just this week, Cecil Richardson, the head of Planned Parenthood, stepped down after ten years. I have no idea how this woman can look herself in the mirror or sleep. Each year, pro-life activists march on Washington DC, and are at best ignored and at worst misrepresented by the media. And yet, Planned Parenthood continues. Their clinics have been closed down, and yet they endure. Do I think efforts such as this are for naught? No! If but one woman changes her mind about an abortion and decides to either raise the child herself or put the child up for adoption, that is a victory.

Do I think that by overturning Roe V. Wade that abortions will cease? I’m not that naïve. But I do feel that it is a cause worth fighting for. St. Theresa of Calcutta once said “It is poverty that a child must die so that you must live the life you choose.”

Are you aware of the story that follows Roe V. Wade? Norma McRae, the “Jane Roe” actually had the child. She did not abort. She became a pro-life activist and spoke out against the cause she was once part of. The media never tells you about this. I wonder why.