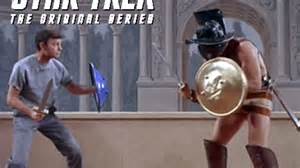 Many of Star Trek’s episodes present an alien society on a particular time in Earth’s history. “Piece of the Action”, for instance, was set in a world resembling Chicago during the height of Prohibition, when mobsters ruled the streets. “Bread and Circuses” takes place in a world similar to the Roman Empire, but with some 20th Century technology. Basically, the episode imagines what the world would be like if the Roman Empire endured into the 20th Century. The infamous gladiatorial battles of the Coliseum are broadcast on TV, complete with commercials. The Enterprise intercepts one of these broadcasts and discovers that one of these gladiators is William B. Harrison, a crewmember of the Federation starship USS Beagle, whose wreckage they discover prior to sighting the planet. When they beam down to investigate, they learn of slaves who have joined a religion called the “children of the Sun”.

I like the concept behind the episode. The gladiator combat is determined by ratings. This is a criticism of NBC’s own emphasis on ratings and the state of Star Trek itself at the time of the episode.  The audience’s approval or disapproval of the fighters determines whether they live or die. It’s surprising this slipped past the executives.

But what I like best is the slaves’ religion. This religion of the “Sun” emphasizes brotherhood and peace. They refuse to participate in the games, as the games are focused on bloodshed and death.  Kirk is intrigued, because he doesn’t remember any religion worshipping the sun that had these beliefs at its core.  Lt. Uhura, however, realizes that Kirk has the wrong idea. It’s not the sun these people worship, but the Son–Jesus Christ. Keep in mind, Gene Roddenberry was actually an atheist, and he wrote this episode along with Gene L. Coon. For this episode, Roddenberry put aside his negative opinion of religion and actually put it in a positive light. He saw that religion could end tyrannical rule. Now, one could suggest that he only included a religion similar to Christianity to keep with the atmosphere of ancient Rome, but I don’t think that’s the case. Perhaps he saw some good in Christianity at times.

Next, we go back to the bad episodes with “The Paradise Syndrome”.