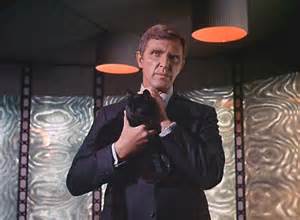 As part of my celebration of Star Trek’s 50th anniversary, I thought I’d count down my picks for the top 10 worst and top 10 best episodes of the original show. For those who are fans of The Next Generation and its spin-offs, I will be talking about those shows eventually. (In fact, I’ve actually started re-watching Star Trek: The Next Generation) The main reason I’m only focusing on the original show is that if I were to do the entire Star Trek TV canon, it would take way too long. For worst episodes, let’s start with “Assignment: Earth”, the episode that closed the second season.

In this episode, the Enterprise travels back to the 1960’s for the second time (the first was in “Tomorrow is Yesterday”). They meet a human alien named Gary Seven, who is accompanied by a black cat named Isis (no relation to the terrorist organization). When he is taken into custody, he warns everyone that unless he is released, Earth will be destroyed. No one believes him, so he eventually escapes and goes to Earth, where he is working in secret. There, he is aided by a sentient computer and Roberta Lincoln, an Earth woman who he hires as his receptionist through a contrived coincidence. Kirk and Spock tail after him, but their interference does little to prevent his actions. In the end, Gary Seven, Isis, and Roberta not only succeed in preventing Earth’s destruction, but they remain on Earth in order to continue interfering with Earth’s history.

Here’s my main problem with this episode: It’s a “back-door pilot”. This means it was written in order to lead into a new series Gene Roddenberry wanted to produce. (In fact, the original draft of the episode didn’t have any characters from Star Trek in it. When no one took the show up, Roddenberry rewrote the script to fit it into the show’s canon) Now, I actually don’t mind “back-door pilots”. Sometimes they’ve actually worked. (Mork and Mindy, Promised Land, NCIS, and The Facts of Life all started with “back-door pilots” from other shows–Happy Days, Touched By An Angel, Jag, and Different Strokes.) But in those cases, the original show’s characters interacted with the new ones and helped the plot along. In contrast, if you took out the Star Trek cast, nothing would’ve changed. Gary still would’ve completed his mission–in fact, he would’ve had an easier time doing so, as Kirk and Spock actually impeded his progress rather than assisted him.

I don’t fault Roddenberry for trying to start a new show. Star Trek was always in danger of being cancelled because while it did have  a good fanbase even back then, it never really had the ratings that pleased NBC’s executives. Fans had to intervene in order for the show to be saved and last for its third season.

But this episode is so different from Star Trek’s usual episodes. The main characters are bumblers in their distrust of Gary Seven. There is none of that optimism that drove the show. It has an air of cynicism, as if Earth will never reach its potential it reached in the show’s futuristic premise.

Next time, I start my countdown of my favorite episodes with “Bread and Circuses”.