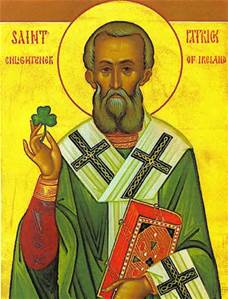 Every March 17th, many cities and churches celebrate St. Patrick’s Day.  Celebrants wear green, parades are held, and bars often serve green-colored beer.  Shamrocks are often seen decorating people’s houses or clothes. But who was this St. Patrick? Why is he such a beloved figure?

Patrick was actually originally from Great Britain.  He was kidnapped by Irish pirates and taken into slavery.  After six years, he escaped and returned home, only to return to Ireland as a missionary.  He was not protected by the rulers of Ireland and was even beaten and robbed on one occasion. And yet this did not deter his mission.

There are many legends associated with Patrick.  One attributes the fact that Ireland doesn’t have snakes to him “driving them all out”. In reality, snakes have never even lived in Ireland, even before Patrick began his mission.

Another legend explains the shamrock as his symbol.  Because if the Irish’s love of nature, he supposedly used the plant as a metaphor to explain the Holy Trinity, explaining that the three leaves represented each Person within the Trinity: Father, Son, and Holy Spirit. (But the three leaves cannot be separated from each other, that creates a heresy called “partialism”)

Since the seventh century, Patrick has been associated with Ireland as its patron saint.  The holiday is not only a celebration of the man and his faith, but also of Ireland itself.

I will leave you with this Irish prayer:

May God give you:
For every storm, a rainbow,

For every tear, a smile,

For every care, a promise,

And a blessing in each trial.

For every problem life sends,

For every sigh, a sweet song,

And an answer for each prayer.