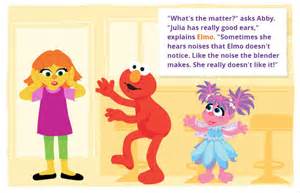 Image: a picture from the new storybook introducing a

Julia has her hands on her ears because the blender in

Mr. Hooper’s store is too loud for her

Sesame Street has created a new project called “Sesame Street and Autism”. This project even has a new Muppet named Julia. This is really nothing new for the show. When I was a fan back in the 80’s, they had a deaf woman named Linda who used sign language and had a giant Muppet dog named Barkly. The project has received both praise and criticism.  The project can be reached at http://autism.sesamestreet.org Personally, I’m conflicted.

Let me talk about what I like first. The story book introducing Julia is great. Elmo shows Abby Cadabby how to interact with Julia and we see both the positive and negative traits in the story. I also like that Julia is a girl, as girls are often ignored when autism is discussed in the media. Even Autism $peaks ignores girls, as I’ve pointed out their trademark puzzle piece is blue because they only care about the boys on the spectrum.

There are ten videos, running from one to five minutes each. We meet four children in these videos (and there’s an animated one with a boy named Ben): Thomas, Yusenia, Louie, and Nasaiah. There’s also a song called “The Amazing Song” that’s pretty much teaching children to treat autistic children nicely.  In the videos, autistic children are shown using AAC, a form of communication using tablets, which is often used by non-verbal autistic children.

Okay, so what don’t I like? First off, the resources. Good, you consulted ASAN, but only after you received pressure from the autism community. Big red flag–Autism $peaks is on your list of resources.  In fact, A$ has been helping fund Sesame Street for years. My regular readers know how I feel about Autism $peaks, so I won’t go into it here.  I will stress that I’m not alone.  Every autism activist and blogger I follow despises Autism $peaks.

Second, the videos that show the autistic children all feature non-verbal children and are done solely from the parents’ perspective. It would’ve been better if they’d shown that there are autistic children who are capable of verbal communication. They mostly focus on the negative side of autism and in two videos, the parents are shown physically restraining their children to reprimand them. (Thomas’s father in particular uses the leash from their service dog) Let me quote an article I found on E is for Erin called “Not in love with Julia”:

“I’m going to say something I know is controversial, but parents’ complaints about how hard it is to raise an autistic child do NOT need to always be shown. They don’t need to be part of every conversation about being autistic. Parenting is hard sometimes, yes. But this narrative of suffering only strengthens the stigma that autistic people face in the world. It helps NO ONE. Not even the person complaining. And certainly not their child.

Can you imagine Sesame Street making videos of parents of typical children complaining about how difficult it is to raise their kids? Can you imagine Sesame Street doing this with parents of kids with other disabilities? Somehow it is unique to autism that the “parents’ lives are hard” story must ALWAYS be included. It really does not have to be included. There is a time and place to talk about how hard parenting your autistic kids can be, and it’s the same place you talk about how hard parenting your typical kids can be, how hard your marriage can be, how hard your friendships can be – privately, with trusted friends and family.”

Also, all of the resources that are available are only meant for neurotypical people, not autistic people. And even then, only for children.  Once again, as an autistic, I am a firm believer in the credo, “Nothing about us without us.”  If you want to be an ally for autistic people, you must have their input. And not after we pressure you to contact ASAN. You should’ve involved them from the start.

I really want to like this project. There are a few positives, but way too many negatives. If Sesame Street wants my support and praise, they will need to address the concerns I’ve talked about. They can and should do better.

3 thoughts on “The Sesame Street and Autism Project”