“Every artist is a cannibal, every poet is a thief
All kill their inspiration and sing about their grief”

In 1980, four men from Dublin, Ireland started a revolution called U2. For 35 years, this band has been one of my all-time favorite bands. The main reason I like them is that all four members are Christian: Bono is Catholic, and the rest are Protestant, and their faith often comes through their music. Another amazing thing about this band is that they’ve never changed their roster:
Bono (real name: Paul Hewson)–vocals, lead guitar
The Edge (real name: David Evans)–backing vocals, lead guitar
Adam Clayton–bass
Larry Mullen–drums
For this post, I will be rating each album using Bono’s iconic sunglasses that he’s been wearing since the 90’s.

Boy (1980)
Singles:“I Will Follow”, “A Day Without Me”
This is probably one of the best debuts I’ve ever listened to. Rarely have I heard a band that sound as polished as this debut. The political and spiritual songs we know them for would come later, but this is a great start.
Best songs: “Twilight” (http://www.youtube.com/watch?v=ifhgIWU2Ols), “Shadows and Tall Trees” ((https://www.youtube.com/watch?v=0gbmRSDTU0c)
Fun Facts: The boy on the cover is Peter Rowen, brother of Virgin Prunes, a friend of Bono’s who is now a photographer. He has also appeared on the cover for War and their greatest hits CD. 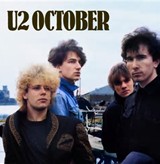 October (1981)
Rating: 3 sunglasses
Singles: “Gloria”, “Fire”
This album’s not as strong as Boy, but it’s not bad. It’s the beginning of their more spiritual focus, which has continued sporadically through the rest of their albums. At this time, all four members joined the Shalom Fellowship. It’s a more peaceful album than the predecessor.
Best Songs: “Rejoice” (https://www.youtube.com/watch?v=ecSYfor6AQo), “With a Shout (Jerusalem)” (https://www.youtube.com/watch?v=Vdz-vixirN0)
Fun Fact: This album contains U2’s only instrumental song, which is also the title track. 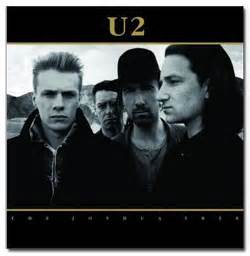 Achtung Baby (1991)
Rating: 5 sunglasses–magnum opus
Singles: “One”, “Until the End of the World”, “The Fly”, “Even Better Than the Real Thing”, “Mysterious Ways”
1991 was a bad year for music. Michael Bolton had a #1! Michael Bolton! Thankfully, one of the bright spots was this album. It proved that even in a year with Nirvana’s Nevermind signaling a change in the landscape, U2 could still make a great album.
Best Songs: “The Fly” (https://www.youtube.com/watch?v=5Y1YFH9A3Bw), “Trying To Throw Your Arms Around the World” (https://www.youtube.com/watch?v=Ho5gh2nL-8Y)

Zooropa (1993)
Rating: 2 sunglasses
Singles: “Numb”, “Lemon”, “Zooropa”
This is the brief period where U2 ventured into “electro-pop” music and in my opinion, it’s a venture they never should’ve taken. It’s a low point in their history, and one I’m glad they moved on from. Of the two albums from this period, this is the most tolerable. But one question has never been answered: why was Edge allowed to sing lead on “Numb”? Edge should only be in the background, because he CAN’T SING!
Best Songs:“The First Time” (https://www.youtube.com/watch?v=kFUY8C5G46M) “The Wanderer” (https://www.youtube.com/watch?v=PjT3eYVcvvs)
Fun Fact: “Zooropa” is actually a collection of slogans from various companies.

Pop (1997)
Rating: 1 pair of sunglasses
Singles: “Discotheque”, “Staring at the Sun”
I HATE this album! It’s U2’s worst album ever. I’m so glad they stopped making this kind of garbage. Look, I have nothing against electro-pop. I have nothing against musicians who want to try something new (David Bowie is a master of reinvention). But this isn’t reinvention, it’s selling out. Moving on.
Fun Fact: The cover is a homage to Queen’s Hot Space.

All That You Can’t Leave Behind (2000)
Rating: 3 1/2 sunglasses
Singles: “Beautiful Day”, “Stuck In a Moment You Can’t Get Out of”, “Elevation”
This is the album that made me a U2 fan again. It’s U2 going back to what made them so good in the first place. “Beautiful Day” is in the vein of their spiritual songs like “The First Time”, while songs like “Elevation” are straight up rock songs that U2 is always good at. Welcome back, U2.
Best Songs: “Beautiful Day” (https://www.youtube.com/watch?v=co6WMzDOh1o), “Peace on Earth” (https://www.youtube.com/watch?v=J74E6yanaO8)
Fun Fact: “Beautiful Day” was covered by Christian band Sanctus Real.

No Line on the Horizon (2009)
Rating: 5 sunglasses–magnum opus
Single: “Magnificent”
Of the most recent albums, this is the one I like the most. It’s their most spiritual album since The Joshua Tree. I just wish it had a better album cover.
Besty Songs: “I’ll Go Crazy If I Don’t Go Crazy Tonight” (https://www.youtube.com/watch?v=UUnYQnkvM_8, “Cedars of Lebanon” ( https://www.youtube.com/watch?v=zQ_gi4ZF_jk)

Songs of Innocense (2014)
Rating: 3 sunglasses
Single: “The Miracle (of Joey Ramone)”
U2 liked this album so much, they uploaded it into Apple’s cloud and gave it to everyone for free! My thoughts? While it’s not their best, it’s far from the worst. I enjoyed it.
Best Songs: “Every Breaking Wave” (https://www.youtube.com/watch?v=iYVEik7Lvc4, “Raised By Wolves” (https://www.youtube.com/watch?v=8zUjM2yHsRo)
Fun Fact: The album cover depicts Larry Mullen holding his son Elvis as a visual representation of how difficult it is to hold on to innocence.

Next time, we go back in time with Marty McFly’s favorite band, Huey Lewis and the News!

One thought on “Jason’s Jukebox: U2”