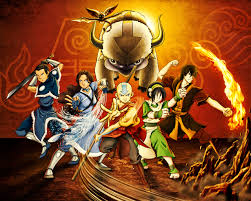 Sometimes I really hate about children’s television is how increasingly idiotic it seems. The general consensus believes that because children will watch anything, you don’t need effort.  Fortunately, there are some programs that believe otherwise. One such program is Avatar: The Last Airbender. It lasted three seasons and has spawned a sequel: The Legend of Korra.

The show takes place in a world where people can bend the elements to their will. Where the Fire Nation has risen up to subjugate the world under its boot. And a boy named Aang must master all four elements in order to restore the world to balance. Helping him are Katara and Sokka, two siblings of the Northern Water tribe, and his flying bison named Appa.

I like this show because it takes its audience seriously. Its world-building is unparalled, and the writing is top-notch. The animation is very fluid, and influenced greatly by anime.  This is a show that both adults and children will enjoy. I highly recommend it.

I’m planning on a four-part discussion of this series. Part two will delve into season 2. Part 3 will be about season 3 and I will post that as soon as I buy it. Finally, I will count down my top 10 favorite episodes.